Basenji is nice and responsive partner. Aloof with strangers, kind and loyal to his owner and his family. Can not be trained at 100%. He has his own head and is a bit stubborn. He has a strong hunting instinct and, thanks to its build and long legs and high speed in the running. 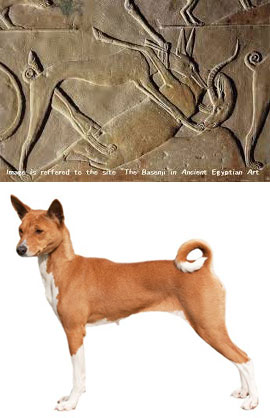 It comes from Central Africa from Congo. Strikingly resembles the dog depicted in the tomb of the pharaoh IV. Dynasty. Basenji is one of the most pristine and most primitive breeds.

Not barking, not adapted vocal cords. Issued but other sounds like a yodel, howl growls and whimpers. It is very clean breed, licking his fur, thus washes, like a cat, so no smell. Females are rutting only once a year in autumn.

It has its own head, so it do not listen to commands, it is smart, needs a human to life. Not suitable in a cage, in cage can hurt himself. It's a little rascal, loves the sun and does not like the cold and the rain. But who needs a dog obedience, he does not deserve Basenji.